Maybe it is a bit odd to refer to a building by Barcelona’s favourite architect, Antoni Gaudí, as a “hidden” gem. However, this house, his very first commission, is easy to overlook due, in part, to its location. Casa Viçens is located on C/de les Carolines, 20, in the bohemian Grácia neighbourhood.

Until recently it was under private ownership, closed to the public, and as it now is open to visitors, we find this an opportune time to remind people of its existence!

The house was completed in 1885 on a commission for Barcelona business man, Manuel Viçens. Casa Viçens was constructed as summer house for the family in the outskirts of the, then, independent town of Grácia, which just five years earlier had received town status and housed just 13.000 inhabitants.

For architecture buffs, the first thing you will notice about the building is the Moorish influence, which was all the rage in the 1880s. Early on in his career even the eccentric Antoni Gaudí was influenced by the trends of the day! One element typical of Gaudí is, however, evident: the mixing of materials. The architect was, throughout his whole career, fascinated by the potential of different materials and the putting together of disparate types to create a new whole.

The house stands today as it did in 1885, with the exception of an expansion to the rear of the building, overseen by architect Juan Sierra de Martinez in 1925. This, and other changes done on the property, were in fact approved by the original architect, who was by then working “full time” on the Sagrada Familia, his great achievement.

We have already mentioned the Moorish influence, and this so-called “Neo-Mudéjar style” is particular to Spanish architecture of the era. Furthermore, a typical aspect of this would be the intricate tile and brickwork, something that would also be a staple of traditional Catalan architecture. Gaudí would eventually move in a much more “organic” direction, taking his clues more from nature than from culture(s), but the Casa Viçens stands as a brilliant testimony both to his unique talent and vision, as well as to how he fits into an artistic architectural practice of the time.

We highly recommend visiting the bustling, colourful Grácia district, and besides shopping, chilling-out at the town squares and paying the numerous restaurants, bars and cafés a visit, drop by the Casa Viçens.

You can get tickets here.

Or if you are interested in one of our private guided tours through Barcelona, make sure that we include this gem in your itinerary! 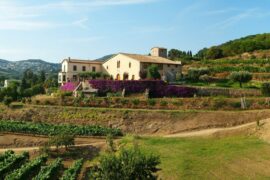