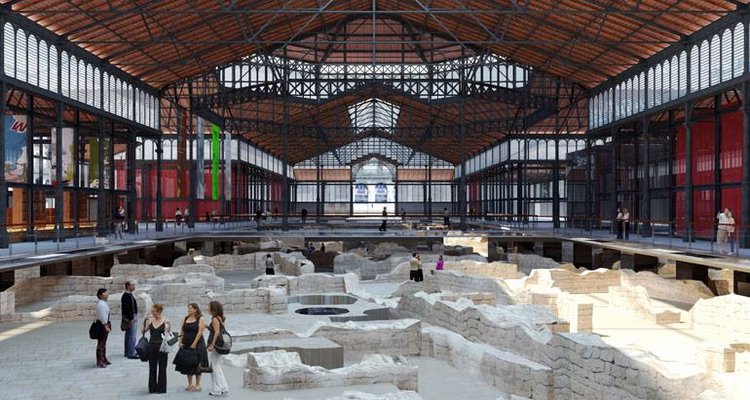 For anyone living in Barcelona between the year 1977 and 2013 the construction site at the end of Rambla del Born, with the magnificent Santa Maria del Mar cathedral at the opposite end, was a familiar sight. Through shifting political leadership the plans for the former food market changed, at irregular intervals, becoming a symbol of political indecision.

Originally constructed in 1873, created by notable Catalan architect Antoni Rovira i Trias, the market is an architectural jewel. In fact, in our humble opinion, the two markets designed by Trias (the other being the newly renovated Mercat de Sant Antoni) are the most stunning of all the markets in Barcelona.

So we can cut the Catalans a little slack that it took them so long to decide what to do with the historical old market building in the Born. Such a fine figure of historical architecture should assume a little contemplation and procrastination after all. So once the decision was finally made to turn the imposing structure into a library it was only once the construction was in full swing that they actually discovered it was in fact an important archaeological site, so construction immediately switched into a major archaeological excavation.

What can you see inside?

The cultural centre and museum centre offers a unique glimpse into Catalonia’s heritage and is an experiential journey capturing the collective memory of the Catalan people as you meander amongst the archaeological remains which make up just 5% of the buildings that were destroyed in the siege of Barcelona in 1714.

The mayor of Barcelona has described the site, which opened its’ doors in September 2013, as a Catalan explanation of ‘what Barcelona and Catalonia were, are and want to be’. Thus cementing its importance in providing a Catalan historical insight into the city as far back as the 15th century, all the way through to insightful cultural visions of the future of this diverse and unique metropolis.

When we arrange private city tours, we always suggest visiting the market, as it is a wonderful, vivid way of learning about Barcelona’s history in the most relevant and impressive of settings!

Previous postWhat to do in July in Barcelona: Music & Movies under the Sun & Stars
Next postFlamenco in Barcelona